Rev. Black was a local leader in the national movement for civil rights during the 1950s and 1960s. The documents and recordings below highlight the wide range of Rev. Black's activism. Rev. Black often involved himself in national events, including walking in the March to Austin and organizing San Antonio's marches to honor Martin Luther King, Jr. Additionally, Rev. Black's presence was influential and documented in his many speeches, including his commentary on the conviction to participate in activism at the Free Angela Davis Rally. The writings and speeches below illuminate Rev. Black’s opinions about and involvement in events such as San Antonio's march in honor of MLK, the Free Angela Davis Rally, and the March to Austin. 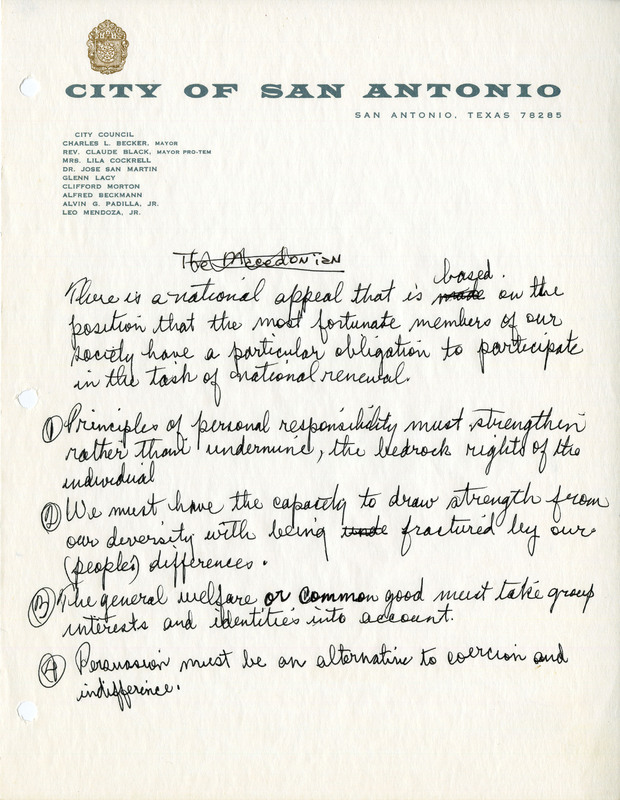 In this document, Re. Black reflects on the importance of engaged participation and cohesion in the Civil Rights Movement, Rev. Black

In this intimate glimpse into Rev. Black’s personal notes, he shares his conviction that privileged members of society must step up to help advocate for those less fortunate. Rev. Black reflects on the importance of valuing a group’s diversity while ensuring a common goal takes priority over individual differences. With words crossed out and re-written, this document is one of the many works in progress that you can read in the Claude Black papers. 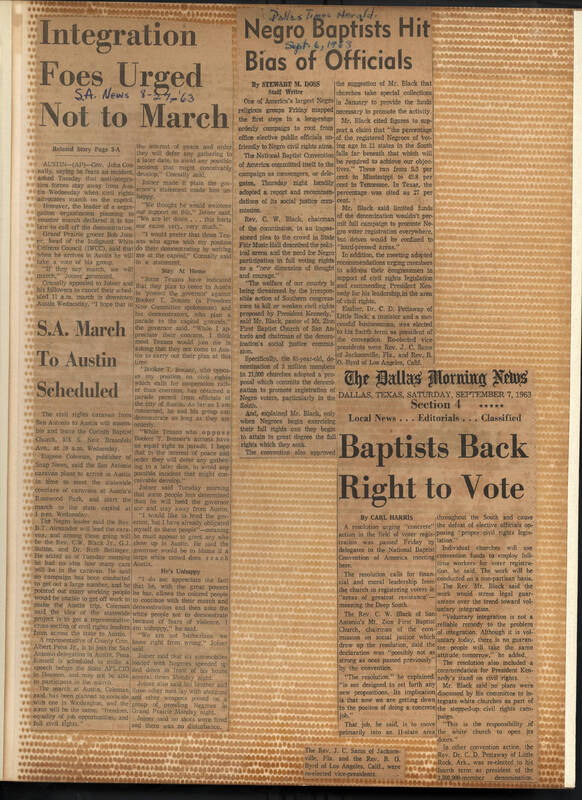 Local news urging segregationists to not march in the March to Austin, S.A. News

In this S.A. News article "Integration Foes Urged Not to March," the author discusses how Gov. John Connolly urged anti-integrationists not to counter-demonstrate during the March to Austin. Rev. Claude Black joined the pro-integration caravaners, who marched to Austin to advocate for “freedom, equality of job opportunities, and full civil rights.”

Rev. Black reflects on history of unmet political promises for racial equality and the need to organize, Rev. Black

Tune in at the six-minute mark to hear Rev. Black in this recording of commentaries from civil rights leaders at the Austin Civil Rights March on August 28, 1963. Rev. Black denounced Governor Connolly for supporting segregation, emphasizing his point through a refrain of "we're tired" to call on lawmakers to uphold civil rights. He also declared that the segregationists’ “days are numbered,” declaring his intention to continue organizing San Antonians to advocate for their rights at the polls. Rev. Black refers to the capital as the “granite building” that’s a center of authority but not of justice, condemmning a legacy of racial oppression.

Listen in to hear Rev. Black urge the public to “come on and get with the fight” by becoming conscious of injustices and forming a coalition to advocate for racial equality. Rev. Black begins his speech at 11:40, declaring the march one of the markers of the “turning point in human history,” where the United States might make progress toward its goal of becoming a country of justice and freedom for all. He calls on the audience to fight for change and justice, pointing to Angela Davis’ “persecution rather than prosecution” as an example of racism in the criminal justice system. 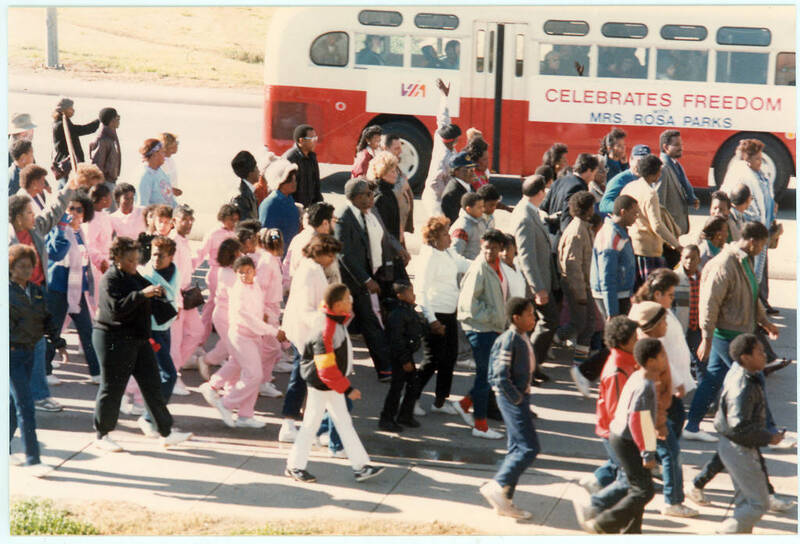 In this photo, San Antonio citizens participate in the city’s first official Martin Luther King Jr. Freedom March on January 19, 1987. Rosa Parks was the guest speaker at the march, and the bus (in the photo’s background) commemorated her civil disobedience in Montgomery, Alabama in 1955. The march was one of Rev. Black’s many forms of community activism that connected local action to national civic engagement.