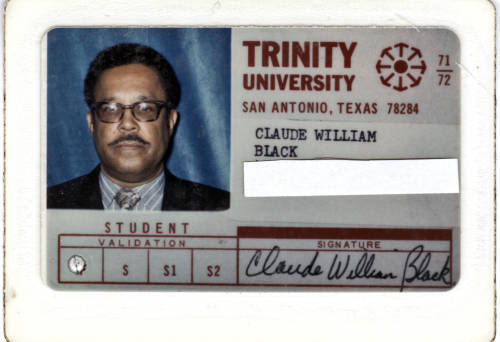 Born in San Antonio, Texas, Claude Black attended primary school and high school on the east side of the city in segregated schools in the 1920s and 1930s. He graduated from high school at Frederick Douglass School in 1933 and was a member of the last class to graduate from the historic Rincon campus.

Encouraged by his father, Claude Black attended college after graduation, transferring schools twice before settling. Starting in 1933, he first attended St. Philip's College in  San Antonio for a semester before moving on to Sam Huston College, now Huston-Tillotson University, in Austin, Texas. According to Grandpa Was A Preacher: A Letter To My Grandson, Black did not find the college challenging enough and transferred again, this time out of state to Morehouse College in Atlanta, Georgia. He finished his undergraduate degree at Morehouse and graduated in 1937.

After working for a few years and living in a few different places, Black decided to pursue a graduate degree in Divinity so that he could become a pastor. He attended Andover Newton Theological School in Newton Center, Massachusetts and graduated in June 1943 with a Master of Divinity degree.

Rev. Black returned to San Antonio and became the pastor of Mt. Zion First Baptist Church in 1949. Though he had attained his master's degree, his interest in learning never faded. In the 1970s, he took classes at Trinity University in Urban Studies. He also maintained relationships with all of his alma maters as well as with schools that he did not attend, often taking leadership roles in educational institutions. The documents in the archive reveal that he was well-respected and well-loved by the institutions he worked with and attended.