At a state level, Claude Black supported efforts to end segregation. He was active in the Texas N.A.A.C.P.  and campaigned for liberal candidates such as Henry B Gonzalez and Ralph Yarborough. In so doing, Black made connections throughout the state with other active clergy members as well as civil rights leaders such as Barbara Jordan. Black’s opposition to segregation led him to protest local events such as Billy Graham’s Crusade in San Antonio, where the inclusion of segregationist Governor Price Daniel, angered African American clergymen. Black’s statewide activism drew both anger and admiration from residents and made him a seminal figure in the story of Texas civil rights and politics. 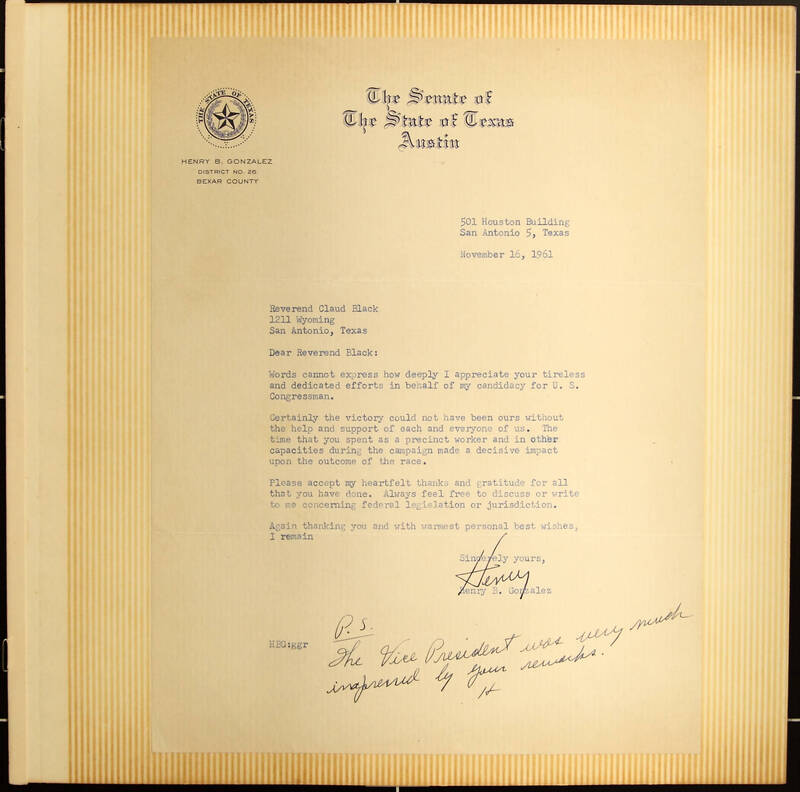 This is a letter from Henry B. Gonzalez to Claude Black which thanks Reverend Black for his voter turnout efforts during Gonzalez’s 1961 Special Election campaign for the United States House of Representatives.

In 1961, Henry B. Gonzalez ran for a recently-vacated congressional seat in San Antonio. Inspired by his faith and the community ties he had formed while leading Mt. Zion Baptist church, as well as his membership in organizations such as the N.A.A.C.P, Claude Black campaigned for Henry B. Gonzalez. Gonzalez strongly supported the African American civil rights movement. By campaigning for Gonzalez, Black bridged a historical racial divide that existed between Mexican Americans and African Americans.

Moreover, Black’s activism reflected his belief that preachers had a duty to get in politics and help improve the world. Black used his position as pastor to support Henry B. Gonzalez and other racially progressive candidates for public office, with Mt. Zion Baptist church becoming a key part of voter turnout efforts. 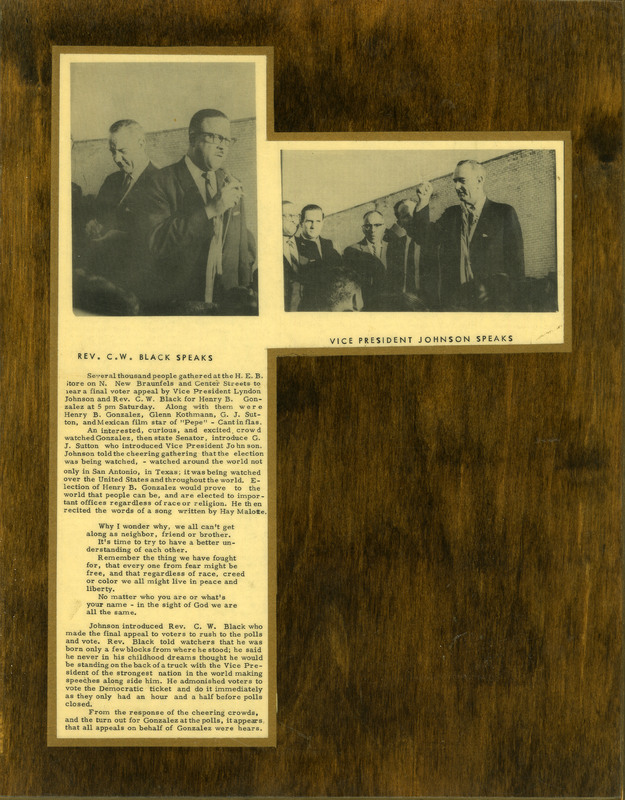 This is a framed copy of an unidentified news article discussing a get out the vote event for the 1961 González campaign and the speeches by Claude Black and Vice President Lyndon B. Johnson at the event.

Black merged his ability to preach to his religious congregation with his civil rights activism. During Henry B. Gonzalez’s special election, Reverend Black gave a speech that was so remarkable and so well-received that he had an article about it framed. In the speech, Black discusses how far he has come from his youth. Black, the son of a Pullman porter, marveled that he now gave speeches alongside the vice president of the United States. He also urged rally goers to vote for the Democratic ticket.