As with the other schools he attended, Black maintained a close relationship with his alma-mater Morehouse Colllege years after graduation, agreeing to serve on the Morehouse School of Religion's Board of Directors in 1970. As a Baptist institution, the college also contacted Rev. Black to help financially support the school with special offering days at his church Mt. Zion First Baptist in San Antonio. 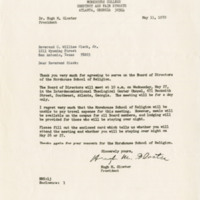 Letter regarding the Rev. Black's agreement to serve on the Morehouse School of Religion's Board of Directors. 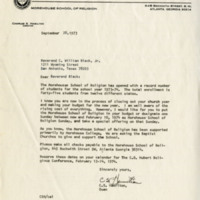 Letter from Morehouse School of Religion asking Rev. Black to take a special offering in his church for the school.

Rev. Black was an active member of the Guadaloupe Baptist District Association. In the early 1970s, he served as its moderator during the Centiennial Celebration celebrating 100 years of the Texas association. The Centennial book holds many thanks and notes from members of the association, including a few notable entries from Rev. Black including his letter from the moderator and greetings from the moderator and his wife. 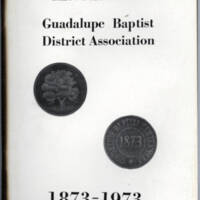 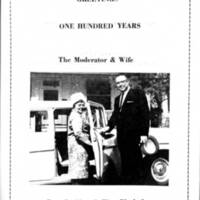 Guadaloupe Baptist District Association Centennial Booklet 1873-1973. Greetings from the moderator and his wife.

A prominent figure in San Antonio, Rev. Black remained connected to his roots, working with the San Antonio Conservation Society in 1998 to petition for a historical marker commemorating the Rincon/Douglass campus, which was the first public school for African-Americans in San Antonio,Texas, built in the 1860s, and his high schoool. By the next year, they had succeeded in getting a historical marker for the campus. Rev. Black spoke at the dedication ceremony, which the San Antonio Express News reported on in detail. 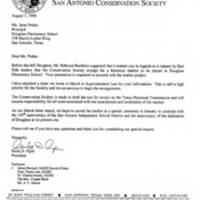 Letter from the San Antonio Conservation Society to the principal of Frederick Douglass Elementary School asking permission for the historical marker. 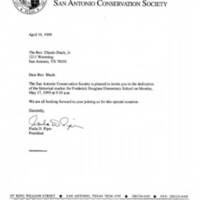 Invitation letter from the San Antonio Conservation Society to Rev. Black inviting him to the dedication ceremony. 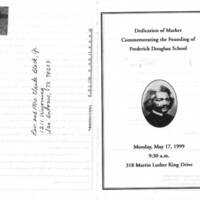 Pamphlet for the dedication of the historical marker for Frederick Douglass School. Exterior. 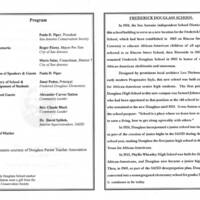 Pamphlet for the dedication of the historical marker for Frederick Douglass School. Interior. 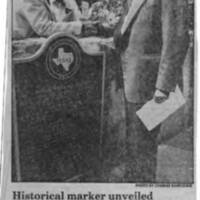 News clipping from the San Antonio Express News covering the dedication of the Rincon/Douglass historical marker. 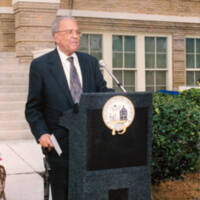 Personal photo of Rev. Black giving his speech at the dedication ceremony for the Rincon/Douglass historical marker. 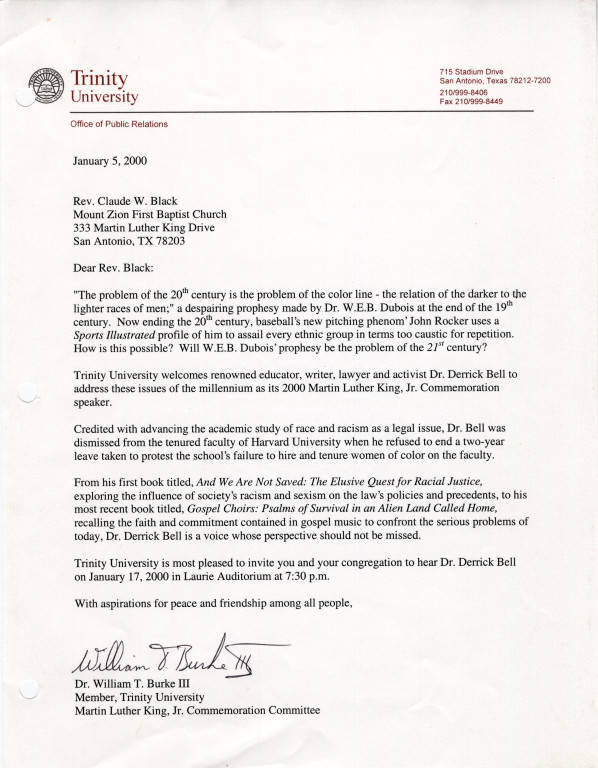 After attending classes in the Urban Studies department at Trinity in the '70s, Rev. Black remained in contact with the university. In 2000, Trinity sent him a letter inviting him and his congregation at Mt. Zion First Baptist to attend the Martin Luther King Jr. Commemorative Lecture, which has become a Trinity yearly tradition to celebrate Martin Luther King Jr. Day.

After the college contacted him, Rev. Black agreed to participate in the St. Philip's Oral History Research Project. The project gathered information about the early years of St. Philip's College in San Antonio through interviews with past students, faculty, and staff. You can see the finished product of these interviews with Rev. Black in the seventh chapter of the book St. Philip's College: A Point of Pride on San Antonio's East Side titled "Oral History Interviews, 1930s." 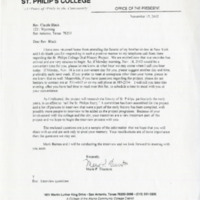 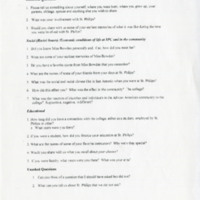 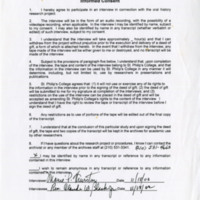 Rev. Black attended a St. Philip's College Black History Month event in 2004, where people gathered for a showing of the oral history film about black Pullman porters, "Miles of Smiles: Years of Struggle," followed by a Q & A. He was a panelist in the Q & A, speaking on the experiences of his father as a San Antonio Pullman Porter. 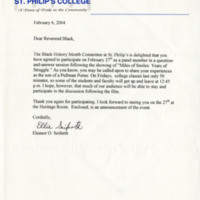 Letter about Rev. Black's participation in the "Miles of Smiles" Q & A. 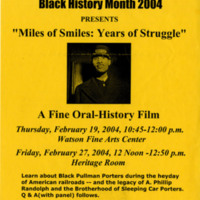 Flyer for the "Miles of Smiles" Black History Month movie and Q & A event at St. Philip's College.

Similar to his involvement with the Guadaloupe Baptist District Association, Rev. Black also worked with local Baptist university Wayland Baptist University in San Antonio, Texas. In the early 2000s the university approached Rev. Black about giving a graduation address and discussed the creation of the Claude Black Award, an award given to an outstanding student graduating from the Religion Department. 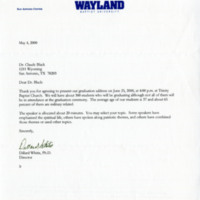 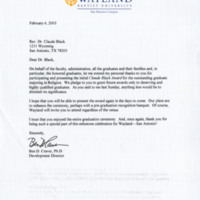