The Claude and Zernona Black Collection includes a variety of Rev. Black’s personal writings, which are crucial to understanding his perspective on race relations and the civil rights movement. In his writings, Rev. Black expressed opinions on topics such as the role for African Americans in the military, the importance of the African American community voting in national elections, morality in government, and much more. He even discussed the controversies of the 1990s, such as President Clinton’s scandal, the OJ Simpson trial, and the Gulf War. Reading his thoughts on these issues provides context for understanding his actions on both a local and national level.

In this document, Rev. Black discusses the importance of African American voting in national elections. He encourages his community by recalling the racial progress of the 1960s and its impact on the African American experience. Rev. Black reminds the community that every vote counts, noting "You can be sure that the enemies of your freedom know that your vote can make a difference in your life." Take a look to learn about Rev. Black’s policy preferences on issues such as affirmative action, the privatization of social security, and the privatization of education. 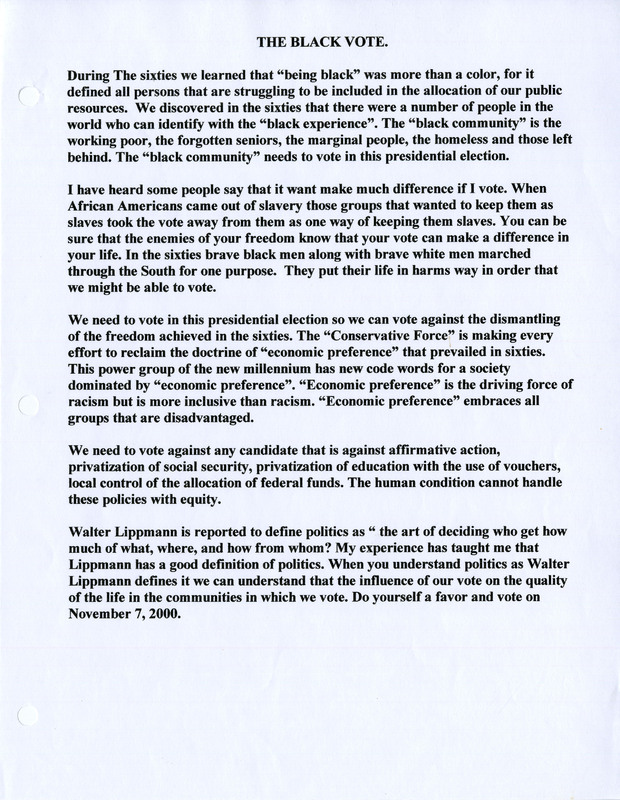 In this piece, Rev. Black characterizes the national identity of the late-1990s through his perspective on three major events: the Gulf War, the O.J. Simpson Trial, and President Clinton’s confession about his affair. Rev. Black uses the Gulf War as an example of the brutal treatment of American workers and a culture that prioritized industrialization over the quality of human life. He argues that the O.J. Simpson trial brings to light political injustices in the federal government. Finally, in addressing President Clinton's affair, he offers a criticism of the ineffeciency of Congress and its lack of ability to bring morality to bear on key issues. These comments give insight on how Rev. Black saw the national character in this period. Read more to uncover Rev. Black’s thoughts on the intersection of national identity and politics. 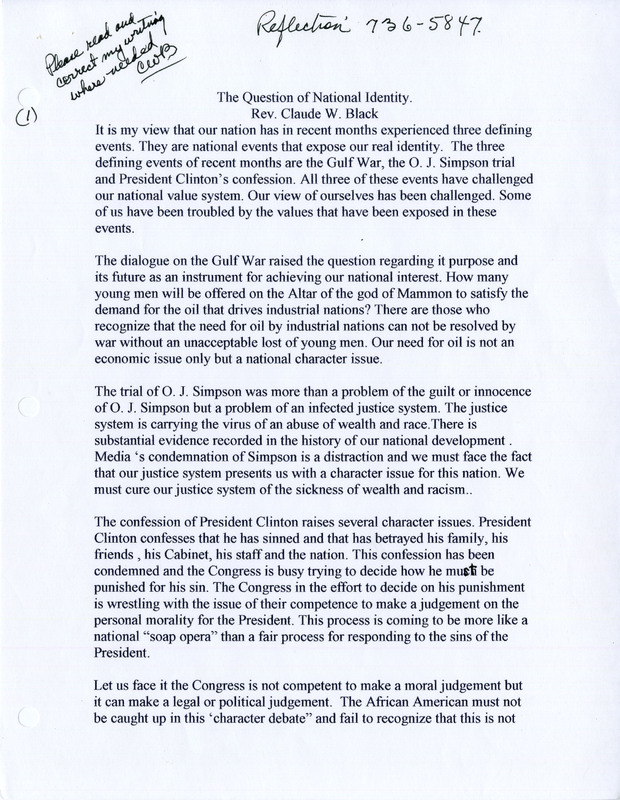 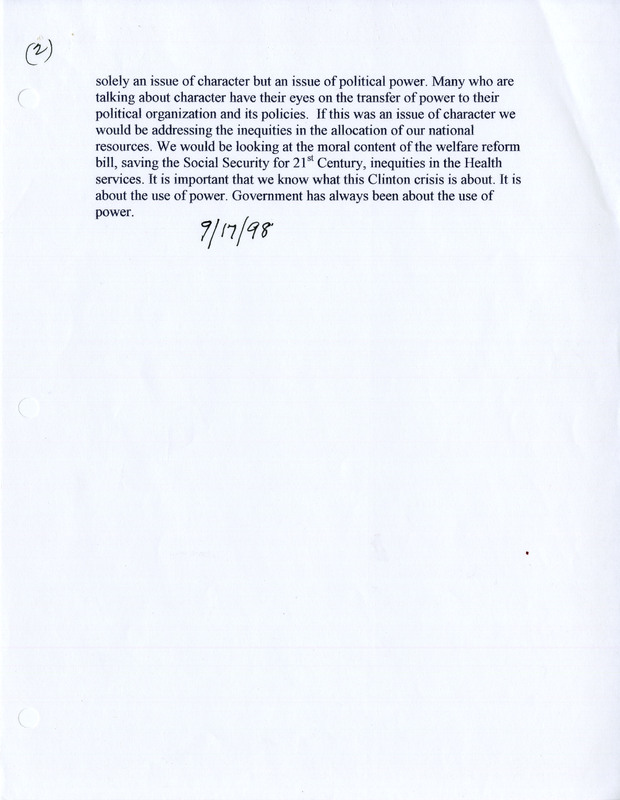 The Question on National Identity, written by Rev. Black on September 17, 1998.

This memoir reflects Rev. Black’s thoughts on the lack of equal opportunity and the role of African Americans in the military. Rev. Black discusses the diproportionate over-representation of African Americans in the military. He uses emotionally-charged language in his response to remarks made by Secretary of State Colin Powell. This document also highlights his anti-war stance, noting "war is primitive and should not claim the devotion of the complex society in the modern world." 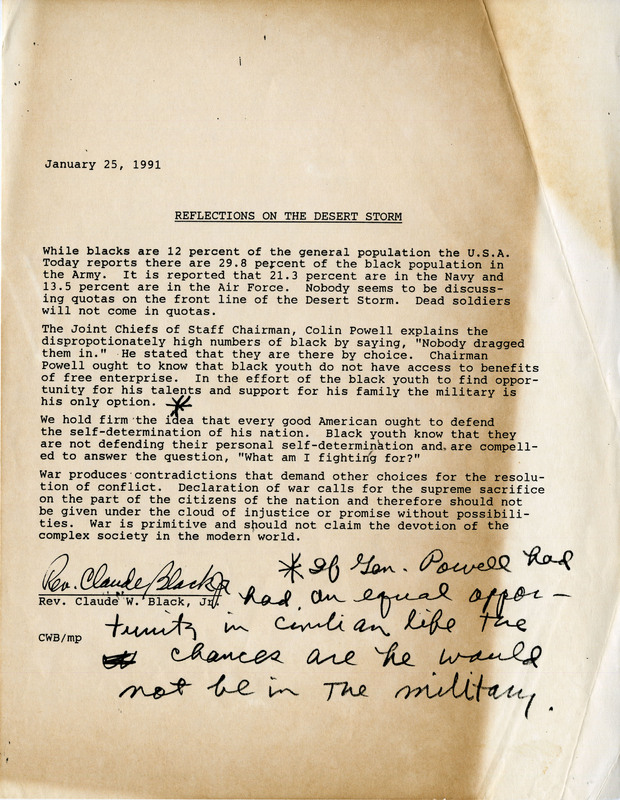 Reflections on Desert Storm, written by Rev. Black on January 25, 1991.

In this piece, Rev. Black criticizes the political climate of 1998, the role of the media, and capitalism. His thoughts provide a detailed summary of his perspective on national character, specifically regarding morality. In this writing, Rev. Black uses the scandal of President Clinton as an example of immorality in public life. He calls on leaders, such as the president, to start discussions about the character of the nation. To find out more about Rev. Black’s perspective on national character, morality, and the role of the media read his piece entitled "Character?" 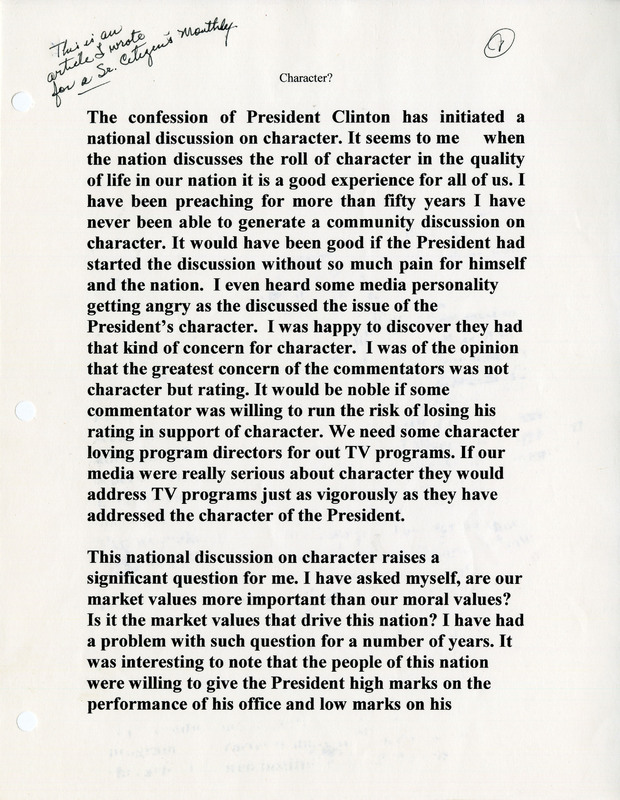 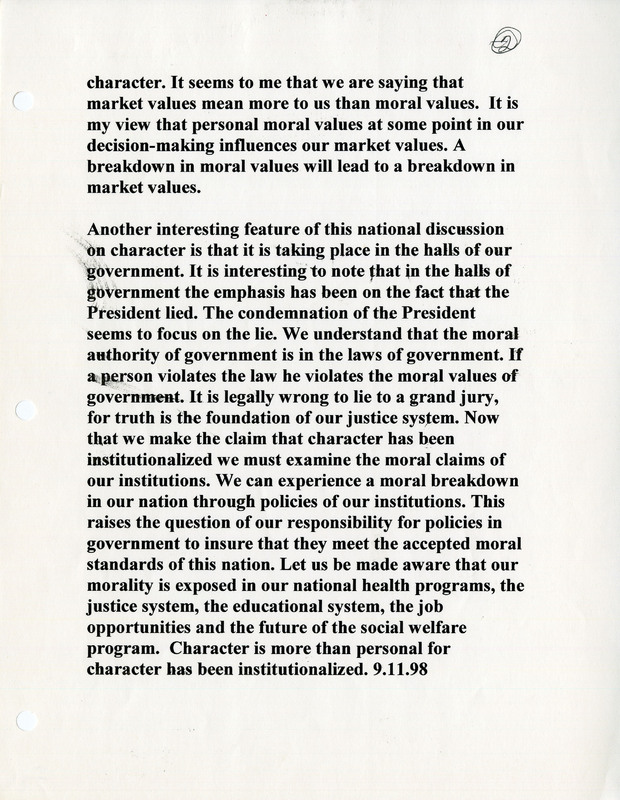 The main topic of this commentary is institutionalized and societal racism, especially with regard to equal opportunity in employment. Black writes, "it is my opinion we are facing a political future that will produce black elected officials who are powerless to adress conditions faced by the black community." Rev. Black also responds to the rejection of nominee Lani Guinier for the position of Assistant Attorney General due to her radicalism. He further criticizes President Clinton for his attempts to mask racism by promoting democratic values. Rev. Black ends the document by reminding the reader of the importance of community, as he thanks his church for promoting a community of equality and justice. 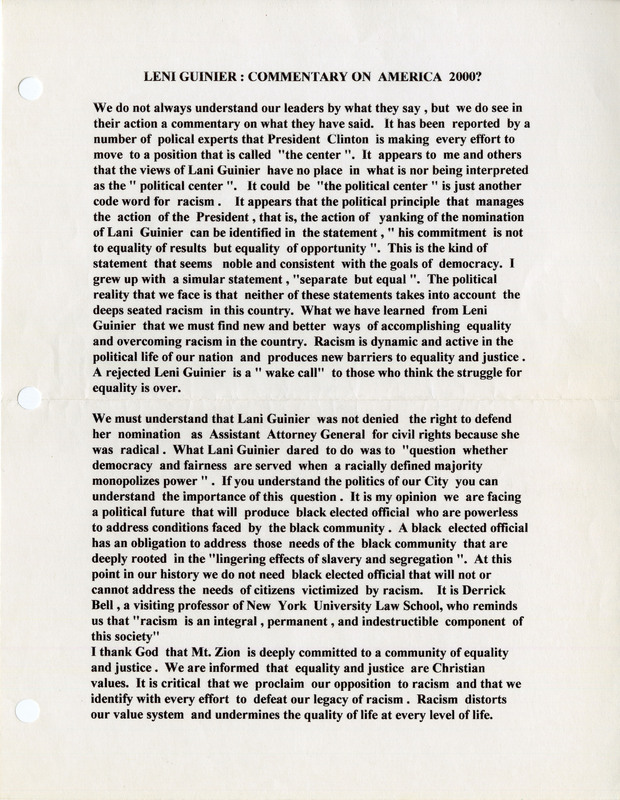 Lani Guinier: Commentary on America, written by Rev. Black in the year 2000.