Claude Black became a respected figure on the national political stage. His connections to the faith community led him to interact with figures as varied as Lyndon Baines Johnson, Martin Luther King Jr., Adam Clayton Powell and others. His prominence was such that he received invitations to the Kennedy inauguration, the Clinton inauguration, and the Obama inauguration. Claude Black's local ties and local activism connected him to national politics through individual connections. 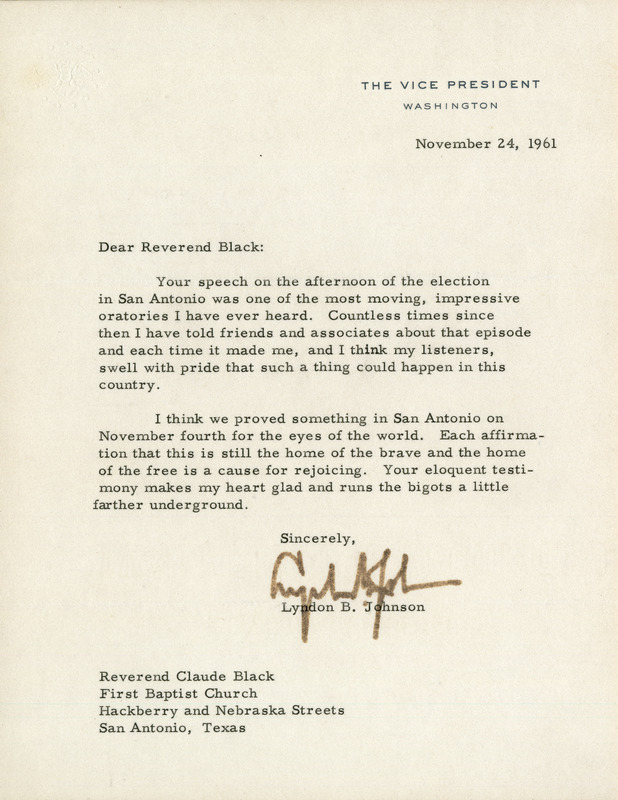 This is a letter from Vice President Lyndon Baines Johnson praising Claude Black’s speech at the final get out the vote effort in Gonzalez’s 1961 Congressional campaign.

During a special election in San Antonio, Claude Black gave a speech at a get-out-the-vote event that moved Lyndon B. Johnson to write a letter to Reverend Black. In this letter, Johnson takes pride in electing Henry B. Gonzalez to the U.S. House of Representatives and declares that it has helped drive bigotry into the ground. Perhaps Johnson’s reaction to Claude Black’s speech and Gonzalez’s victory showed a glimpse of Johnson’s motivations while signing the Civil Rights Act of 1964 and the Voting Rights Act of 1965.