In this segment, we dive into the financial implications of the merger with Trinity. With World War II unfolding and in light of years of financial hardship from the Great Depression, money was tight for both Trinity and the University of San Antonio.

In Chapter 6 of Trinity University: A Tale of Three Cities, R. Douglas Brackenridge notes that the school was initially set up for stable, financial success. Throughout the 1920s, the school had increased its overall enrollment and had summounted an endowment of around $700,000 by 1929. However, the encouraging signs faded with the onset of the Great Depression: unemployment rates rose to 25% and the schools enrollment dwindled. Throughout the mid-1930s, the school's main focus was on survival rather than flourishing.

Entering the late 1930s and early 1940s, the idea of a merger began looking very lucrative for all parties involved. Merging would create a healthy endowment, a good base for foundational success, and a greater pool of available students for enrollment. 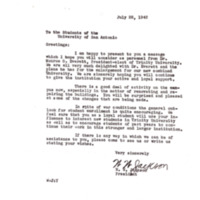 An uplifting message from President Jackson that outlined and ensured the financial security of the school post-merger. This promise seems a little shaky given that the President asked the students to help with the enrollment of other students, however it was a sign of the times.

How would you have handled the financial upheaval of the Great Depression, coupled with the impending doom of WWII? Do you think a merger was the correct decision?