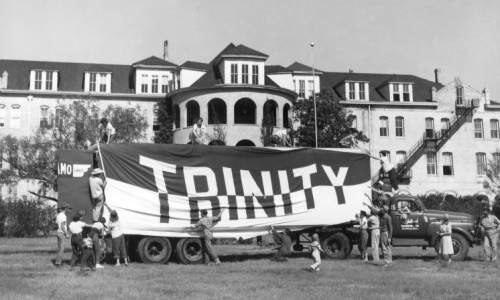 Photograph of students in front of Woodlawn administrative building in process of moving from the Woodlawn campus to the newly built Skyline campus.

In 1939, the Presbyterian synods of Texas proposed a merger of Austin College and Trinity University in order to preserve both institutions. Trinity president Frank Wear selected San Antonio as the ideal location for the combined institution because the city had industry support and the San Antonio Chamber of Commerce were willing to assist. Once plans for the San Antonio-based merger got underway, the synods also reached out to the board of the University of San Antonio, formerly the San Antonio Female College/Westmoorland College. By 1939, the leaders of the three institutions had formed a commission to discuss the merger seriously. However, these talks unfolded during a time of considerable uncertainty, as the United States continued to grapple with the Great Depression and World War II broke out in Europe. The international climate created concern about the state of each institution and, as a result, the merger. Ultimately, Austin College backed out of talks, citing financial and national concerns. Austin College’s reservations were duly justified. At the point of the merger in 1942, the United States had entered the war and had begun the process of total societal mobilization. This mobilization effort, in concert with the uncertainties of global war and the ongoing effects of financial issues dating to the 1930s raised questions about the future of the University of San Antonio. University leaders were not alone in expressing concern about this, as students  likewise etched their worries throughout their school newspapers.

Despite these global storm clouds, in the summer of 1942, San Antonio Chamber of Commerce gladly welcomed Trinity University into the city, and local papers such as the San Antonio Express News reported that community reception was warm. Religious and financial concerns were addressed as members of the commission weighed the benefits of the merger. While the cooperation between the schools was successful, the merger was yet another instance of tumult in the history of the San Antonio Female College. SAFC had experienced multiple name changes as the college became co-ed, along with other internal developments. The inconsistency in the institution’s names contributed to confusion amongst graduates. The traditions and titles associated with the name changes and eventually the merger complicated the relationship alumni had with the university. Debates following the merger considered to what extent SAFC, Westmoorland, and USA alumni should be involved with the university. 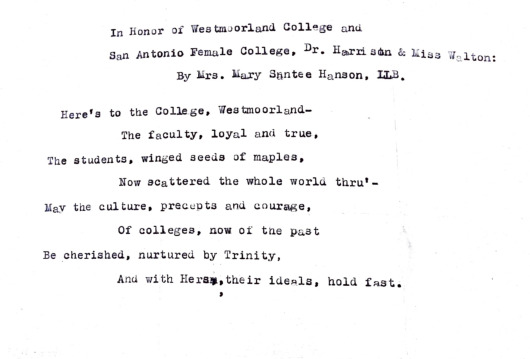 Poem commemorating the San Antonio Female College and Westmoorland College as the university begins its merger with Trinity.

Imagine you are a student of the University of San Antonio on the cusp of merging with Trinity. Would you share the same optimism about the merger that the San Antonio Chamber of Commerce did, or would you have concerns about your school's identity undergoing significant changes?