The Methodist Church played a crucial role in the daily lives of students and faculty at the San Antonio Female College and Westmoorland College. The school stressed the importance of religious and spiritual refinement in women. Its pillars of education rested on the basis of maintaining Christian living. In the 1923 Course of Study Bulletin, the school proclaimed its values in alignment with the Methodist church and combined “love for knowledge for its own sake, a keen sense of values, and an appreciation for the finer things in life in a Christian atmosphere.” As such, their requisite for being religious in character led to strict rules. A student from the graduating class of 1898, Mrs. Maude White Zachas, recalled “We were never permitted to have young men callers. We rarely saw boys except at a distance!” The school built its curriculum and activities around promoting the moral values of the church because it wanted graduates to be perceived as “the finest type of Christian woman,” as the 1926 Course of Study bulletin noted. 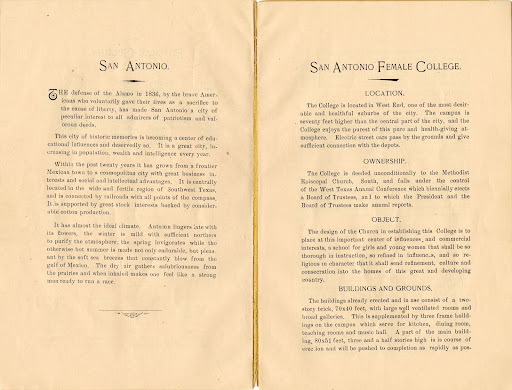 This is an excerpt from the San Antonio Female College (1897) Handbook (p.6).

This excerpt from the San Antonio Female College (1897) Handbook describes the importance of integrating the Church into the center of college activities so that young women could be “thorough in instruction, refined in influences, and religious in character.” It also outlines what college leaders viewed as the standard for womanhood, which “combined intellectual culture, refinement, and Christian living.” This goal manifested in required school devotional exercises and devout Bible study. Could you see yourself following the rules outlined in this handbook? 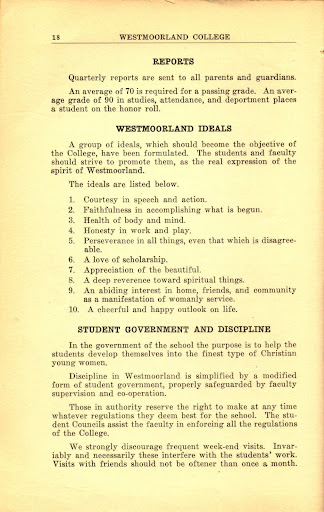 The 1926 Westmoorland College Handbook described "Westmoorland Ideals" as including “a deep reverence toward spiritual things.” Some abstract qualities they claimed to  instill in their students included faithfulness, courtesy, honesty, and perseverance to help turn them into “the finest type of Christian woman.” Scholarship and a love for education was also highly valued and seen as a part of the spiritual journey undertaken by students. 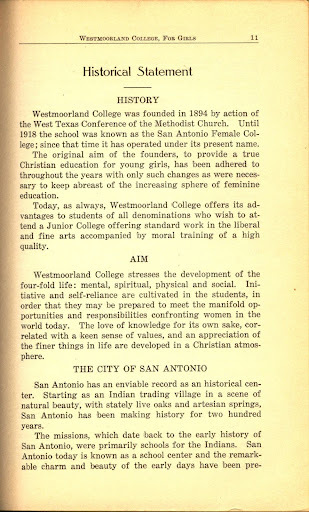 This is the Westmoorland College For Girls Historical Statement (1923) (p.11).

The original aim of the Westmoorland College for Girls, per the founders and this 1923 Course of Study Bulletin, was to provide a true Christian education for young girls, accompanied by “moral training of a high quality.” The college focused on long-term integration of moral values into the lives of young women, highlighting the development in four areas of life: mental, spiritual, physical, and social. 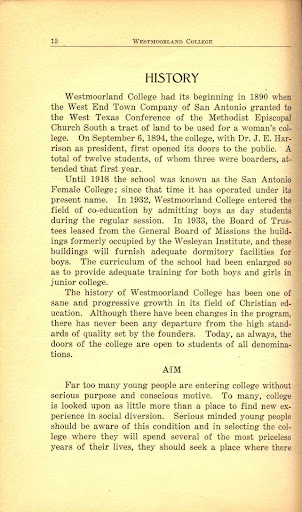 The 1933 Westmoorland College History Book outlined sound scholarship and an atmosphere permeated with a Chrisitan atmosphere as crucial elements to every college. There was a great emphasis on "serious-minded young people" as opposed to those who view college as an opportunity to engage in social events and network. The Westmoorland College for Girls firmly believed in sound scholarship, student-led initiative and self-reliance, and the maintenance of Christian values. In keeping with this ideology, all teachers at Westmoorland College asserted that they were professed Christians with great collegiate careers. Do you think it was necessary that religion play a factor in the employment of these professors, no matter how beneficial it was to the cohesiveness of the environment? 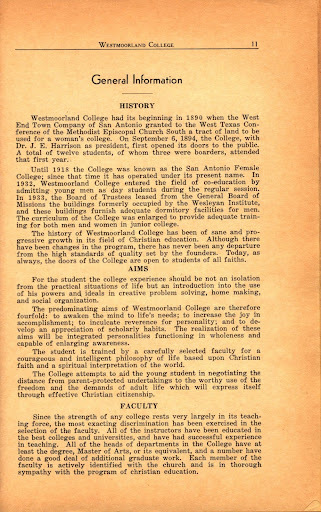 The aim of Westmoorland College, per this 1934 Course of Study Bulletin, was to encourage students to maintain a healthy Christian lifestyle and pursue Christian citizenship past college in their adult lives. The school sought to foster a Christian environment through the student’s distance from their parents to return devout scholars.

Despite the prominent role that religion played in the school's early official documents, syllabus, and campus life, religious influence waned as time went on and newer, more secular practices were integrated into the school. Religious practices eventually became voluntary instead of obligatory, allowing for religious diversification. Do you think, at the time, these practices were effective in achieving San Antonio Female College and Westmoorland College for Girls aims? Or are you of the opinion that these practices should have been voluntary all along? Despite its stance on inclusivity, how do you believe non-practicing Christians or people of different faiths operated on campus?