This section provides an overview of the influence of religion on the daily academic and social lives of students throughout the history of the college. The West Texas Conference of the Methodist Episcopal Church spearheaded the establishment of the San Antonio Female College. The school founders worked to embed their philosophy of providing a Christian Education in order to prepare students for successful Christian living through Bible classes, later called Religion classes, which were mandatory for all students for a majority of the school's history. School officials also required students to attend religious services on Sunday mornings until 1946, four years after merging with Trinity University. The school accepted students from all sects of Christianity and encouraged students to continue their religious practices while away from home.

As you look through this section, consider how religious influences on student life changed over time. 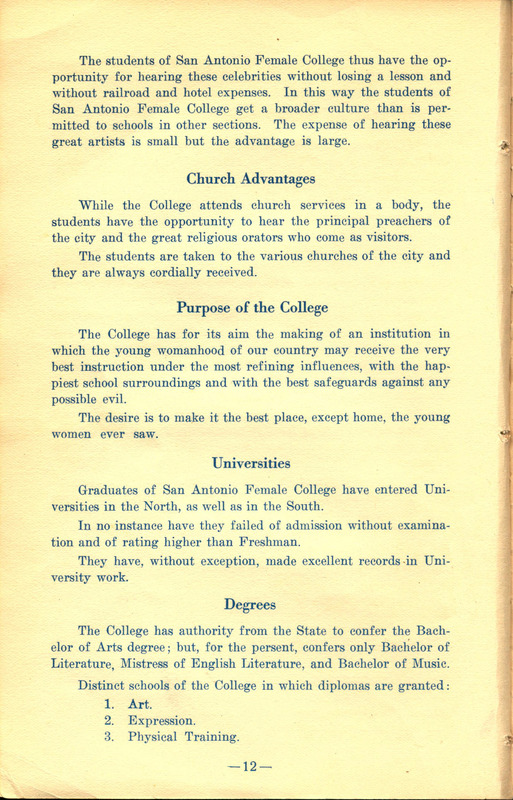 This page of a San Antonio Female College courses of study bulletin discusses the "Church Advantages" of the school.

In addition to requiring students to attend religious services on Sunday mornings as a student body, the SAFC also maintained close connections with local Methodist churches. The SAFC often took students to attend these churches, where they reported they were “always cordially received." During these outing, students often had opportunities “to hear the principle preachers of the city and the great religious orators who come as visitors.” These trips away from campus provided a dynamic social and religious life for students.

Religion also influenced the curriculum of the San Antonio Female College. The school offered devotional exercises and Bible study for students. Students were required to take Bible classes for all degrees. In the 1912 Courses of Study Bulletin, the four courses offered included: 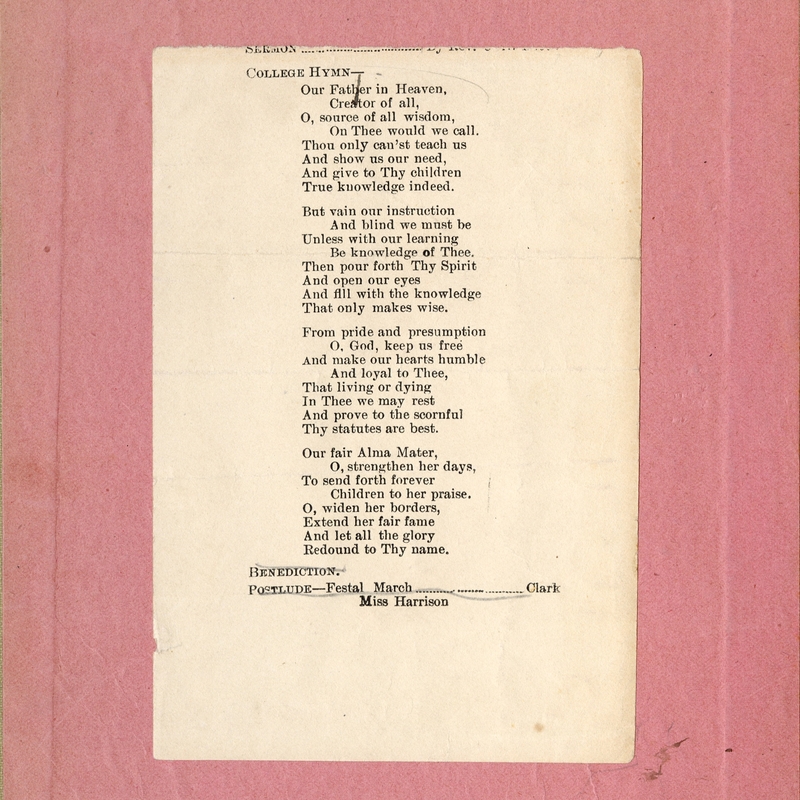 This copy of the College Hymn was cut out from an Alumnae Association of S.A.F.C. event program. It has been pasted to the inside cover of the association's logbook where they recorded their meeting minutes.

Academics and religion were both highly valued by the school’s entire community. In her 1960 commencement speech, republished in the Mart Herald, alumna Mrs. H. L. Carrington expressed her hope for the “continued growth and the wonderful work the university is doing for our young people in attaining higher education and Christian development.” The College Hymn combined these two core values and emphasized how religion was embedded into other college events. 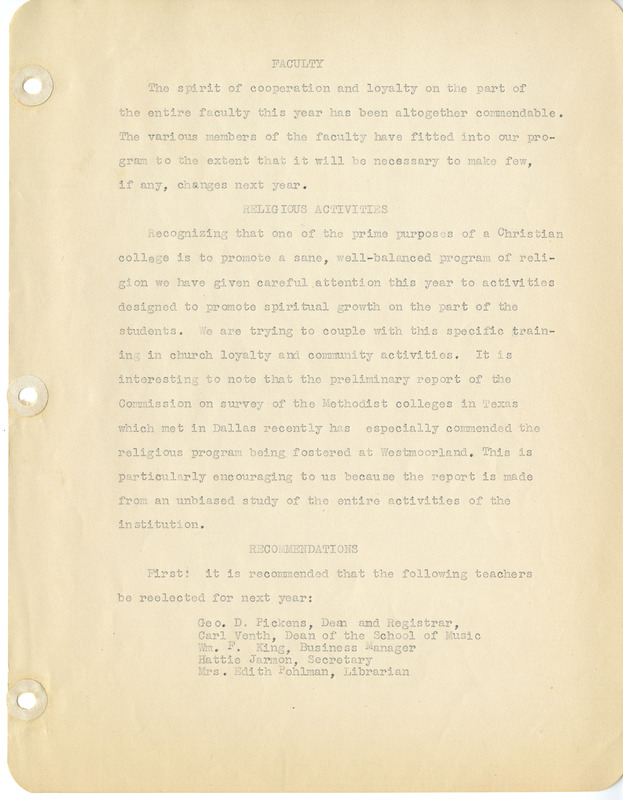 An overview of the religious activities at Westmoorland College from a 1933 annual report. The religious life of students at the college was "especially commended" by a survey of Methodist colleges in Texas.

As the school transitioned from San Antonio Female College to Westmoorland College, terms like "Christian college" and "Christian Education," began to appear in official documents produced by the school. This Annual Report from 1933 described a Christian education as “a sane, well-balanced program of religion” with “activities designed to promote spiritual growth on the part of students'' coupled with “specific training in church loyalty and community activities." Students were expected to attend church services on Sundays and became further involved in church life. In a survey of Methodist colleges in Texas the “religious program being fostered at Westmoorland was commended,” which showed the high degree of religious commitment and involvement expected of students.

This trifold brochure argues for the importance of providing a Christian Education to students in order to attract donations to the university. 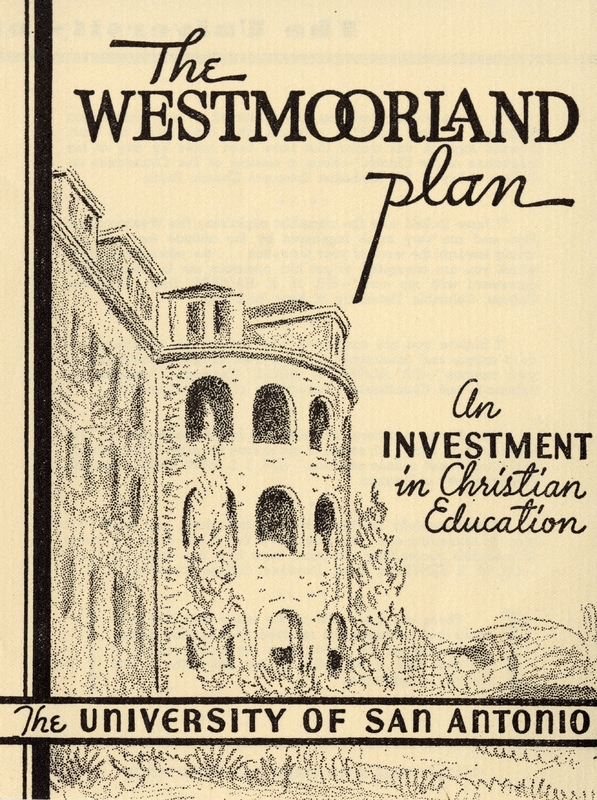 As the school transitioned from Westmoorland College to the University of San Antonio, the college used its connections to local Methodist churches and respected program of Christian Education in order to raise funds for the school. This trifold brochure advertises the school’s “unique program of Christian Education'' and outlines the Westmoorland Plan. This plan was “directed toward training every element of a student’s personality so that its students may go forth into an adult world with the assurance of a mature, cultured mind; sound character; full and responsible command of all their faculties mental, physical, emotional, and spiritual; and with adequate preparation for successful Christian living in present-day society.” 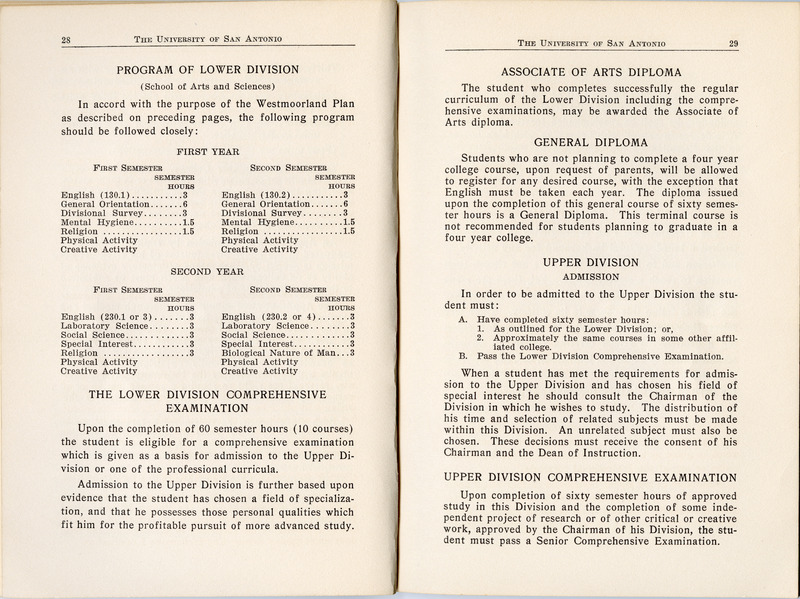 "In accord with the purpose of the Westmoorland Plan," The University of San Antonio required that students take religion classes during their first three semesters. 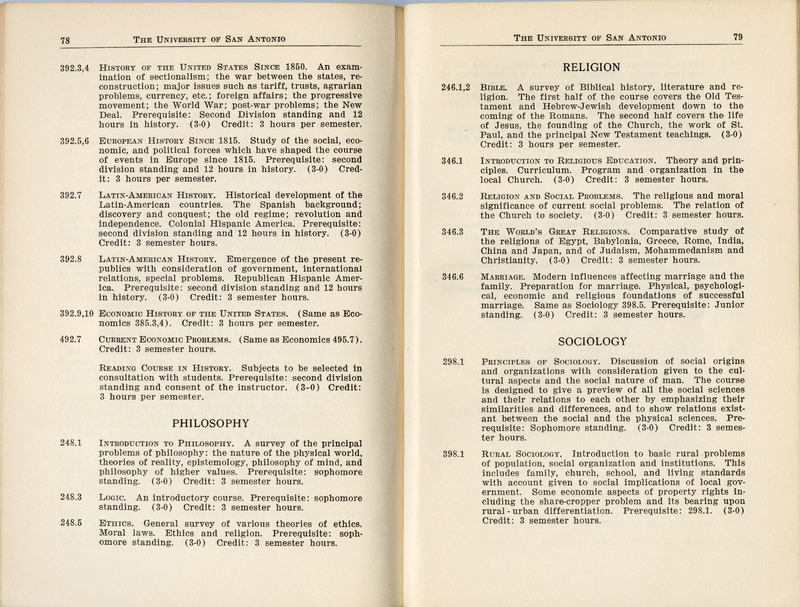 This page from the 1941 Courses of Study Bulletin outlines the religion classes offered at the University of San Antonio.

Under the Westmoorland Plan for Christian Education, religion courses remained in the curriculum for all students. The University of San Antonio required students to take religion classes in their first three semesters. Religion classes ranged from the history of religion, teaching religion, and the influence of religion on society and culture. 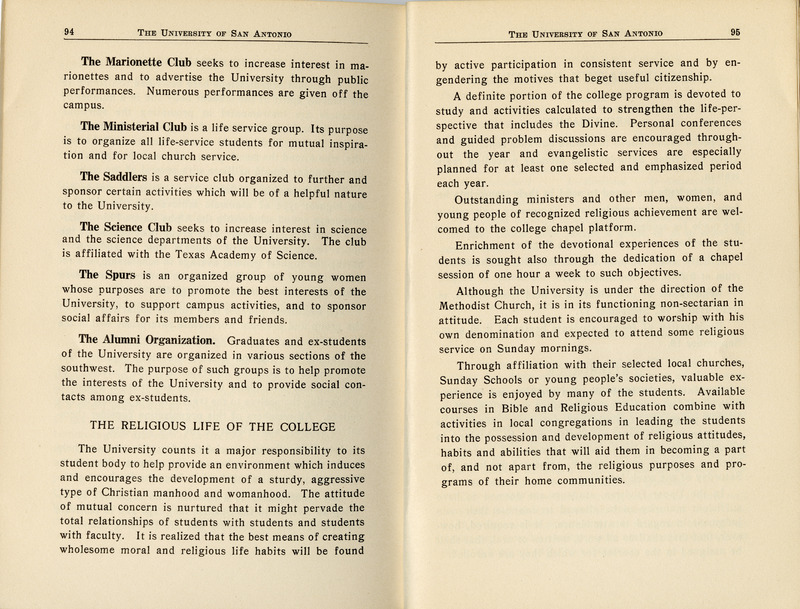 These pages from the 1941 Courses of Study Bulletin provides an overview of the religious life at the University of San Antonio.

The religious life of the University of San Antonio was characterized by “active participation in consistent service.” While students were still expected to attend religious services on Sunday mornings, they no longer attended as a student body. Students developed “religious attitudes, habits and abilities” at school in order to foster “wholesome moral and religious life habits.”