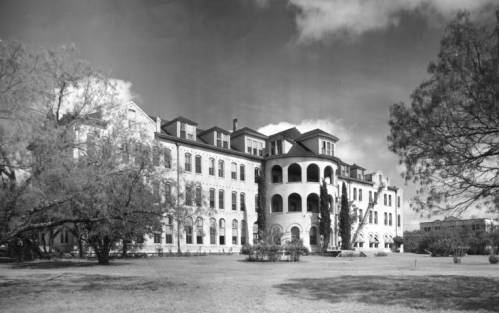 This photograph depicts the Main Administration Building of the San Antonio Female College. It was a multi-purpose building for the various named colleges that used its campus.

The San Antonio Female College was created in 1894 through a land grant from the West End Town Company to the West Texas Conference of the Methodist Church South, which sought to create a college for Christian white women in south Texas.

During the 1890s through the early 1900s, the San Antonio Female College was located outside of the city limits in the West End Development as described in 1913 to "give advantages of quiet and seclusion." The rural location of the college was an ideal environment for keeping students engaged and connected to the university's mission in 1913: "set(ting) up a standard of excellence for womanhood." This standard combined intellectual culture, Christian living, and refinement. More than likely, the isolated and rural campus allowed administrators and faculty to keep a tight rein on the movements of their female students, though it also provided land for a herd of Jersey cows to feed the campus its dairy!

The San Antonio Female College changed and developed alongside the city of San Antonio. Scholars argue that the expansion of the railroad, the streetcar railway, and the diverse city population all contributed to San Antonio's growth during the late 19th and early 20th centuries. The next page considers the relationship between the growth of transportation methods and discrimination in San Antonio, which particularly shaped the daily lives and well-being of the West side communities. Consider your location in San Antonio as you read these pages; did the streetcar lines travel near where your home is located today? How might the railroad and streetcar have influenced your neighborhood?