With the horrors of World War II on their minds, students wrote numerous thought-provoking essays and articles for school publications. Coupled with the merging of schools, students faced much upheaval in their lives at this time, which only contributed to the rich subject matter of their creative works. The stark accounts they provided of their world reveal the challening nature of the times they lived in and of the world around them.

Vernor Daly, of The Brand Iron, discusses the impending repeal of the Arms Embargo Act. With World War II just beginning, this was a topic of hot debate given that it would almost certainly mean that the United States' involvement in the conflict would be greater than previously anticipated. 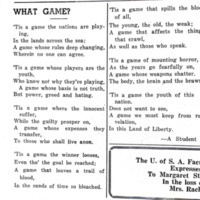 A poem from an anonymous Trinity student symbolizes their opinion on the world at war. The student expresses their distress to the way in which the war is a game with the young as pawns for evil. 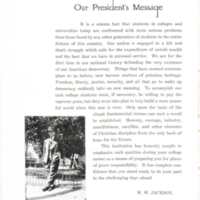 An open letter to the San Antonio community outlines the difficult nature of the issues students were dealing with. In conjunction with the merging of schools, students had to endure the looming fear of death.

In other elements of the world involvement, the school faced a mass surge of diversity among its students as the Trinity name began to carry weight.

This article from The Brand Iron shows how Trinity was becoming a more diverse and multicultural learning environment, with students hailing from different areas of the United States and the world. With the merger and expansion of Trinity, the university became a more attractive place to attend school.

How do you think you would have dealt with going to University whilst WWII was occurring?