David’s college years were complicated, fraught with heartbreak and frustration but also marked by personal growth. At Trinity University, he formed deep relationships and developed his passion for theater. Scenes from Trinity and San Antonio appear in a handful of his poems, especially in the collection Fifth Season. He acted in several plays, including As You Like It, Electra, and Richard III. He also worked as a set designer and stage manager. Along with fellow student Lisa Lungren, he co-directed the one act play Birdbath. These achievements earned him a fully funded graduate fellowship to study theater at the University of North Dakota.

Considering his post-graduation options, David decided he could not build a life in Texas. He felt stifled by stigma and homophobia. Texas did not prioritize sexual health or education, especially not for gay men. After his diagnosis, David learned he had probably contracted HIV as an undergraduate, before self-educating on safe sex.

In addition to the unique challenges of being a gay man in South Texas during the 1980s, David dealt with the same struggles that many Trinity students face today: family pressure, breakups, sleep deprivation, and stress. “Although I have an exam at 8:30 in the morning,” He scribbled in a loose-leaf poem called “Fried,” “I’ll go shopping at HEB from 2:00am til 3 AM…I can not endure!” [sic] 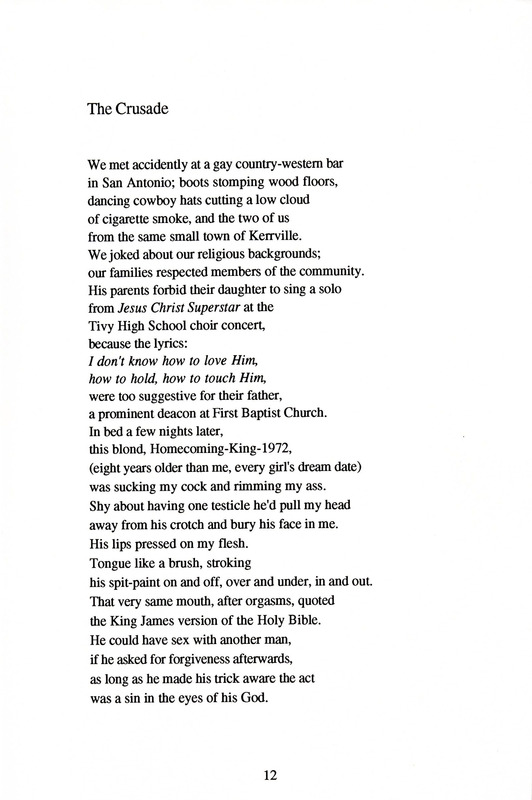 This poem describes a sexual encounter that Matias had with a boy from his hometown while he was at college. While Matias was able to accept himself, his partner found every sexual act with Matias sinful, and ended up married to a girl his family approved of. 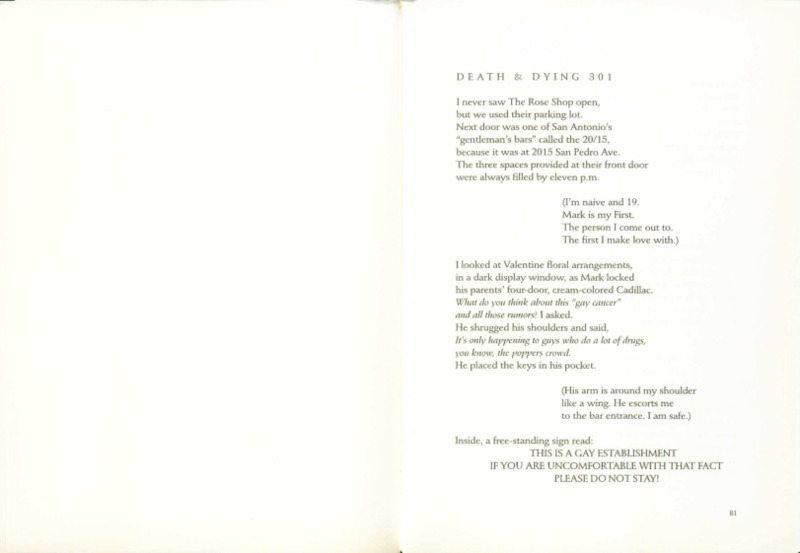 This poem is named after the class "Death and Dying 301," an upper-level sociology course taught by Dr. Mike Kearl. The poem describes college friends and lovers, set against backdrops like a gay club on San Pedro Avenue and the Ruth Taylor Theater at Trinity University. At least some of the details are fictionalized. For example, while Death and Dying was a real class at Trinity, Dr. Kearl (called Dr. White in this poem) was never divorced. The poem says he dies of cancer during Matias' lifetime, but Dr. Kearl died of a heart attack in 2015. 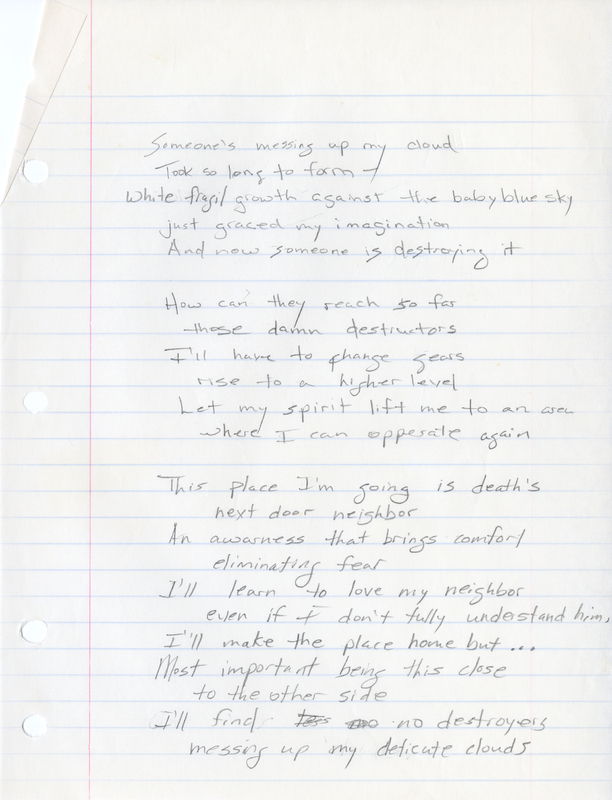 In this poem, written during his time at Trinity University, David Matias describes his spirit as a cloud that other people try to damage. Throughout his career, Matias thought and wrote often about death. He watched many friends die of AIDS, and many others commit suicide. This poem draft reflects Matias's felling of having death as his next-door neighbor, a nearby force he had to accept in order to survive. 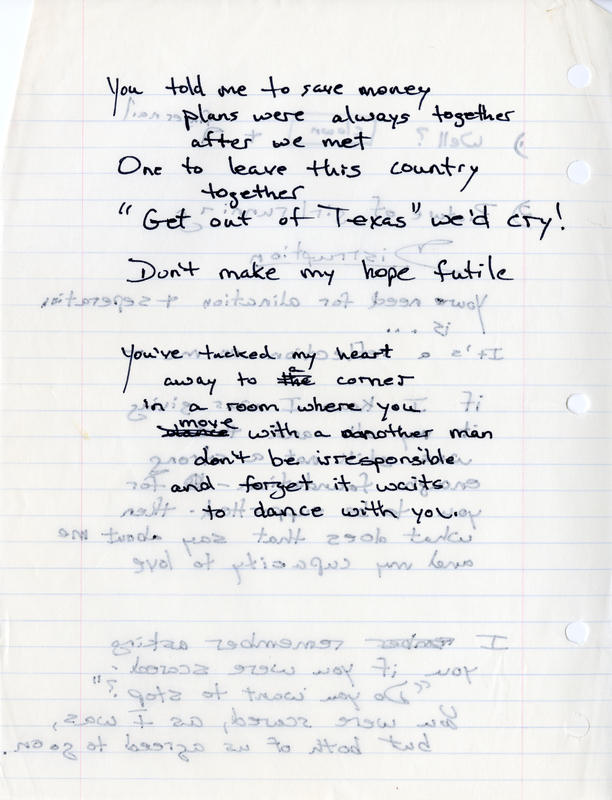 David Matias often associated Texas with oppression. In this poem draft, scribbled on a piece of loose-leaf notebook paper during his time at Trinity University, Matias speaks as if to a lover: " 'Get out of Texas' we'd cry!" In 1995, addressing a summer class at Harvard, Matias said: I think I'd be dead today if I hadn't moved to the [Provincetown] community I live in. I think if I'd lived in San Antonio, I would not be here... not just becasue literally there wasn't good healthcare there, but the stigma, the homophobia, I mean, it just eats away at you." 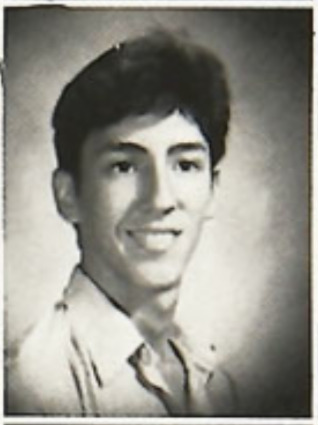 A photo of David Mathias from his Senior Year at Trinity Univeristy. Although David endured many hardships throughout his schooling, he frequently was able to find refuge in his art. 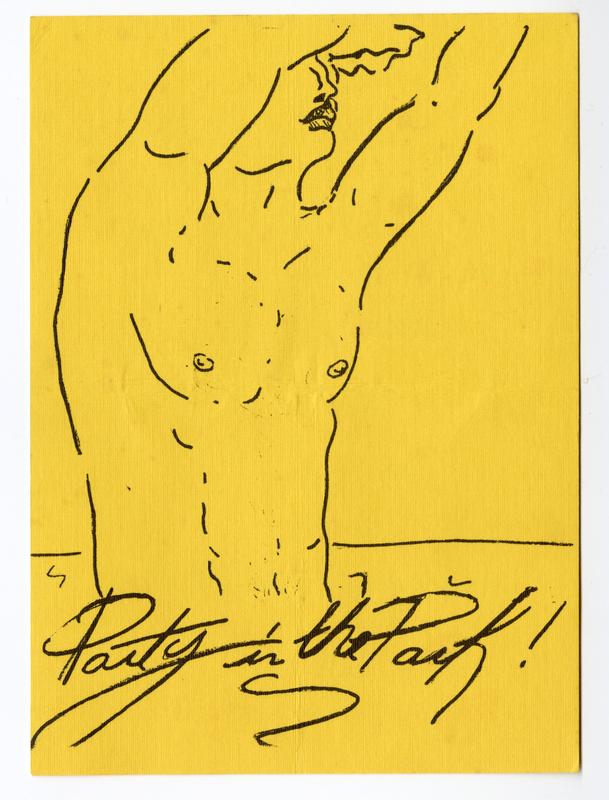 The front of this yellow party invitation shows an inked drawing of a shirtless man dancing waist-deep in water. The back has printed letters, announcing that the BYOB potluck would be held in the back of the Olmos Park Basin, near Trinity University. On the back, David Matias wrote two phrases: "Crying out for help...my subltey...You never heard the scream!!" and "dancing behind you, watch you operate." While the party happened a year after David graduated from Trinity, it may reflect his San Antonio social circles. During graduate school, David likely spent the summers with his family in Kerrville and visited nearby San Antonio.