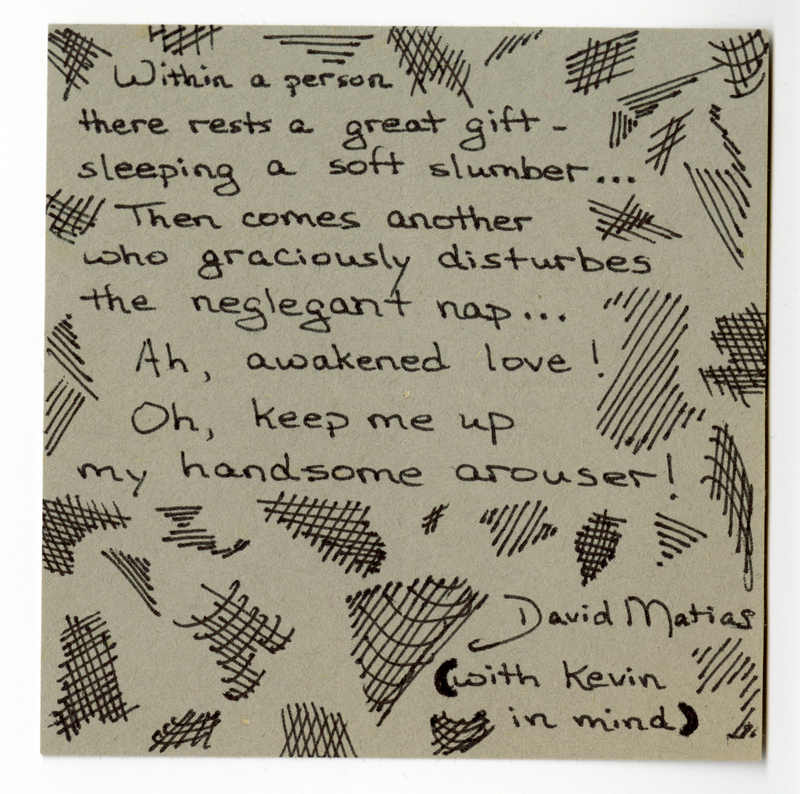 The vivid threads of David Matias’ relationships weave throughout his poetry. Reflections on love, faith, and activism mingle in his works, displaying a dynamic sense of self. To Matias, poetry provided a space where he could wrestle with self-acceptance and grapple with the world around him—the written word served as a tool for him to shape his own identity as a gay man.

Matias’s sexuality was crucial to his identity as well as his work. Much of his poetry reflects his relationships and a love for his partners, expressed openly and honestly. It is clear that he was comfortable with himself as a gay man, as his poems do not contain internalized homophobic rhetoric or evidence that he felt resistance towards his sexuality.

Religion constituted an equally important (if occasionally conflicting) facet of Matias’s identity. Matias experienced doubts about his Christian faith starting at an early age. As he grew older, he became increasingly critical of an unresponsive God and the reductive attitudes of his followers. He rejected the Christian construct of God and embraced his own form of spirituality. In his vision, physical love became salvation, a means of supplanting a neglectful God with deified lovers.

At other points in his life, Matias actually accepted Christianity. Believing that at its core, Christianity promoted love and acceptance, he reasoned that God would bless those who were open to such values. He asserted that God would accept gay marriage because he believed that love was the foundation of a good union, not gender. Matias criticized people like his father for misunderstanding Christianity and endorsing static dogma rather than staying true to Jesus’ message of love.

After Matias received his AIDS diagnosis, he took on another identity: activist. He participated in AIDS charity events to raise awareness and support for people suffering from the disease. He also brought his activism into his art. Many of his plays and poems highlight the LGBTQ community, advocating for queer existence. Furthermore, Matias proudly lived his life with his disease, encouraging others who sufferered from AIDS—as well as other LGBTQ individuals—to live their lives without shame.