Lauderdale's Influence in her Community

Ursula Lauderdale had a significant impact on her community. She was a member of the River Art Group, a group formed in 1947 by artists in San Antonio who wanted to share their art in combined shows on the Riverwalk. This decision allowed for her to share more of her art with the community. Along with that, she was the chairwoman of art in the Dallas Pen Women, a group of women dedicated to advancing the arts in areas such as literature, visual art, and music.

Lauderdale always attempted to foster the support of art, whether through teaching or through her various affiliations with the artistic groups in her community. She had various art exhibits, specifically one with the San Antonio Federation of Women’s Clubs, where her paintings were brought to the public and sold.

Along with the River Art Group and the Dallas Pen Women, Lauderdale helped to organize local art events such as “Buy A Picture Day.” This event was meant to bring awareness to the works of local artists and allow for the community to support the artists by purchasing one of their pieces.

Overall, Ursula Lauderdale was a very important figure in her community where she was a part of many groups that attempted to help support the arts. She made a lasting impact with her works, and was a strong feminine figure during her time. 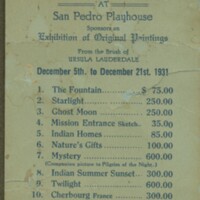 This ticket was a part of Ursula's scrapbook. It records an event with the San Antonio Federation of Women's Clubs where Ursula's art was the main focus. 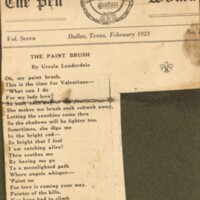 This newspaper for The Pen Women has a poem written by Ursula Lauderdale. Ursula was an active member of the club and even designed the official seal on the top of the newspaper. This specific clipping, from 1923, shares Ursula's poem "The Paint Brush" to the subscribers of The Pen Women. 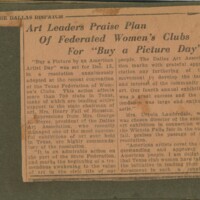 This newspaper clipping shows "Buy A Picture Day" and Ursula's involvement in the event. 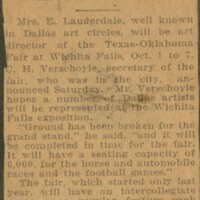 This newspaper clipping comes from the scrapbook of Ursula Lauderdale. It records her position as the Art Director at the Texas-Oklahoma fair.