The Artwork of Ursula Lauderdale

Ursula Lauderdale’s art reflected her immersion in unique cultures and places. Her artwork tells the stories she heard during her life and depicts the places she traveled to in order to experience those stories herself. Lauderdale's thirst for adventure extended to her artistic mediums. Whether by experimenting with oil paintings, ceramic tiles, woodcut tiles, photography, porcelain, stained glass mosaics, Lauderdale continued to challenge herself throughout her career.

In the 1920s, her passion for learning more about the communities she was working with led her to live near an indigenous religious group known as “The Penitentes Brotherhood” in New Mexico. Lauderdale combined her artistry with the spiritual techniques she learned at the Brotherhood to create beautiful pieces of art such as the “Indian Wildflowers” and other Native-themed pieces. Lauderdale could not truly experience the art she was creating without immersing herself in the community. She valued the process of creating art because she was able to experience and interact with new cultures and people.

Lauderdale became so devoted to her craft that it became something of a devotional process in which she constantly remembered and reflected on the inspiration of her pieces. She continued this practice of devotion while creating her famous stained glass artwork known as the Ruth Window. Lauderdale spent seven weeks in Dallas, working for 8 hours every day to create the masterpiece. Her work reflects the love and respect she had for the process of creating art itself.

Lauderdale also drew inspiration from her contemporaries. She always carried a scrapbook to record poems she felt drawn to or to paste inspirations of any sort. Additionally, she utilized scrapbooks to chart her successes, a practice that helped her to stay motivated and devoted to her artistic practice.

The love and devotion that Lauderdale poured into her work did not go unnoticed. The public respected and admired her artwork by purchasing her pieces and commissioning her for projects. Her painting "Little Spanish Town" sold for the equivalent of $6,300 in today's money, while "Twilight" and "Mystery" sold for the equivalent of $9,500. Ursula Lauderdale continues to inspire; her hard work and love for art are admirable and evident all these decades later. 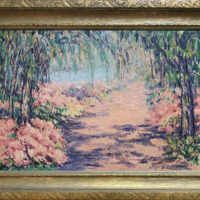 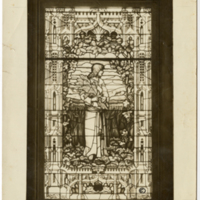 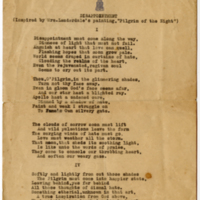 Poems Inspired by Her Work