In pursuit of her art, Ursula Lauderdale courted mystery. An undated newspaper clipping from her scrapbook tells that to gather inspiration for her work, Lauderdale studied in Europe and later (the article does not specify exactly when), lived near the Native American religious group “The Penitentes Brotherhood” in New Mexico (Scrapbook, 19, Bottom). Lauderdale was said to have explored the most “isolated” parts of the country, no doubt seeking the most far-off places buried deep in her psyche (Scrapbook, 19, Bottom).

In the back of her scrapbook, which she used to document her career, and filled with a  number of insightful and inspirational quotes, Lauderdale pasted a poem by Olive Schriner, entitled, “Artist’s Secret”. The poem told of how an artist, envied and imitated by all of his friends, died of a wound in his heart-- a wound he had been using to dip his paintbrush in. A sonnet that Lauderdale herself wrote in 1923 refers to her paintbrush as her “lady love” which made her brush “each cobweb away”, and sometimes forced her to paint with a passion so red Ursula felt she was catching “afire” (“The Paint Brush”, Scrapbook, 17). For Lauderdale, art was about love: for her work, for herself, and for her admirers waiting far up the hills she painted (“The Paint Brush”, Scrapbook, 17).

In other mediums, too, Lauderdale sought to form a connection with the depths of her endurance and spirit. While experimenting with ceramic tiles, woodcuts, porcelain, and stained glass mosaics, Lauderdale became a “practical artist”, who endured heat, cuts, and splinters to immerse herself into the raw practice of creating (Scrapbook, 16). In a number of her works, such as her drawings of the "monk’s" chairs and the tiles she hand-baked in the sun after the missionaries who built the Alamo, she sought a connection with all kinds of spiritualities. Her popular “Indian Wildflowers” painting, among her other Native American-inspired works, must be understood as her attempts to connect with the passion Lauderdale studied during her time with the Penitentes Brotherhood. 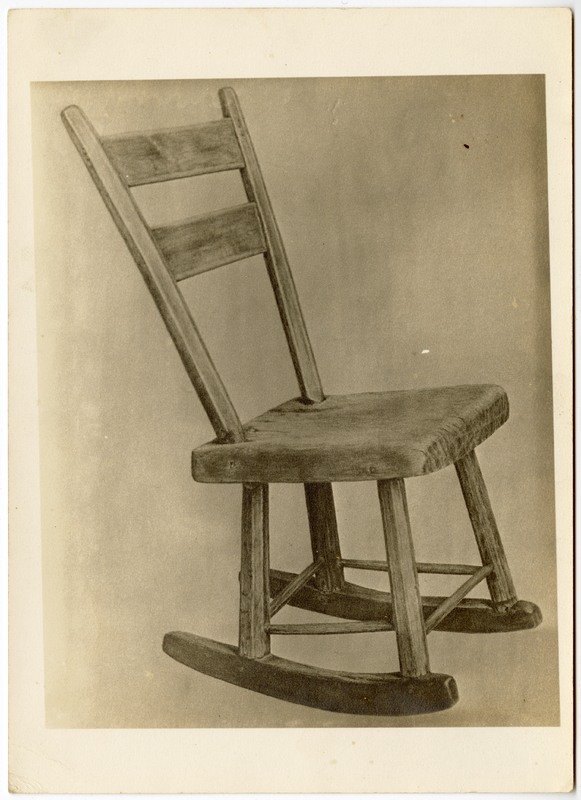 Still life drawing of a chair

Simplicity seems to be the overarching theme of this drawing of a rocking chair by Ursula Lauderdale. No doubt when hard at work, this chair could provide its sitter with either sessions of deep contemplation or light-hearted relaxation. But in this piece, Ursula has chosen to give the chair its own day off. Free from its duty to its sitter, the chair is finally able to rest, not needing to worry about any compositional distraction in the background of the piece. 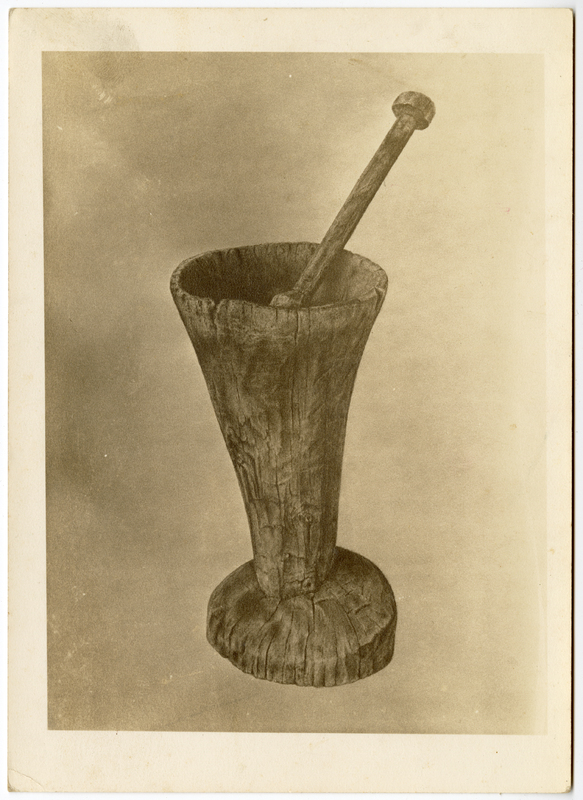 Still life drawing of a morter and pestle

Ursula’s depiction of a mortar and pestle circa 1941 on watercolor and graphite on paper. Ursula elevates the mortar and pestle by drawing it as hardwood to provide more depth to the piece. The mortar and pestle appear to be worn as if they were used by many to create herbs or medicines for others. Ursula's use of shading and unevenness provides a sense of solemnness, yet appreciation for the mundane household item. 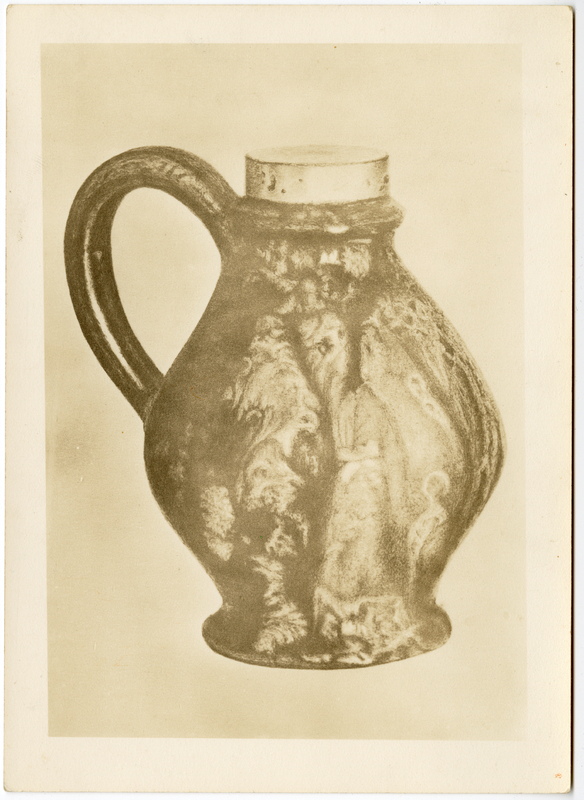 In this detailed drawing, Lauderdale captures the tones and flows of a ceramic vase. The angle she chose showcases the unique and intricate pattern on the front of the ceramic, inviting the viewer to wonder about its purpose. 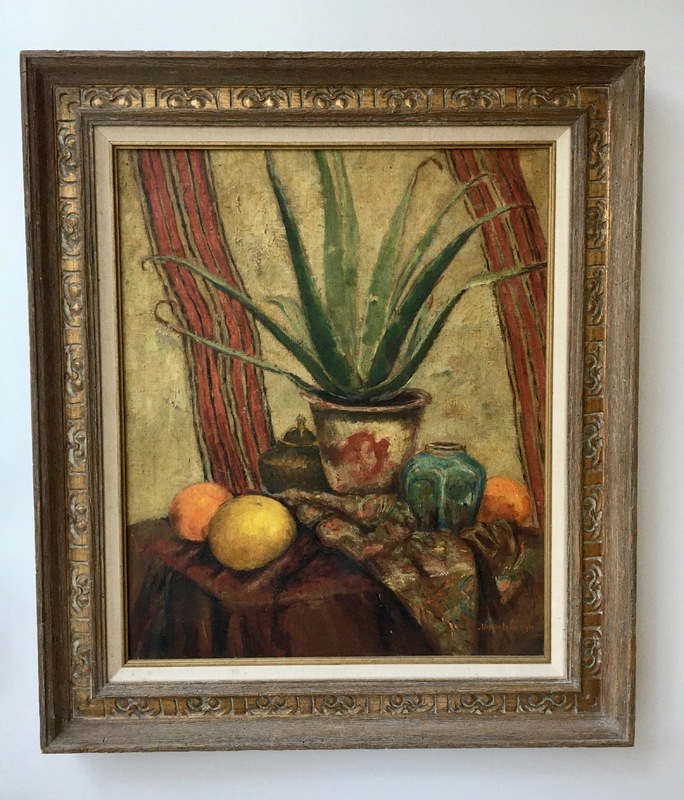 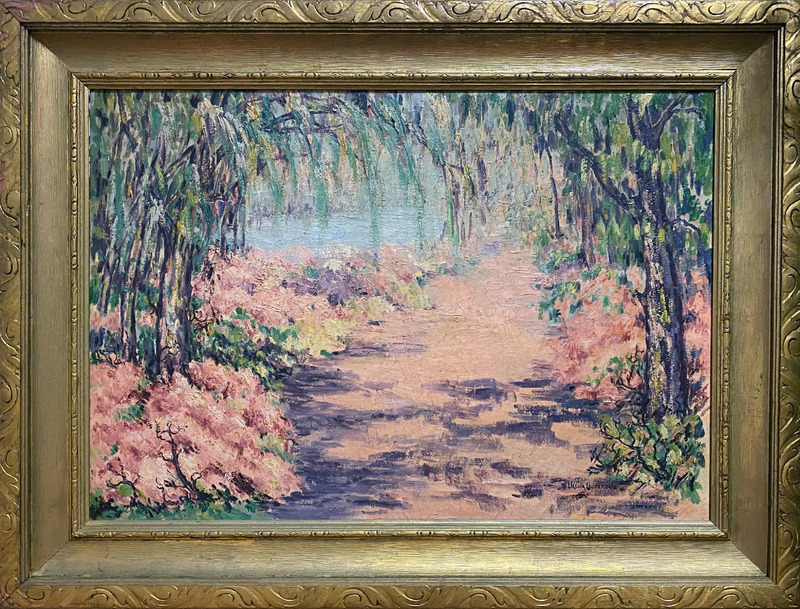 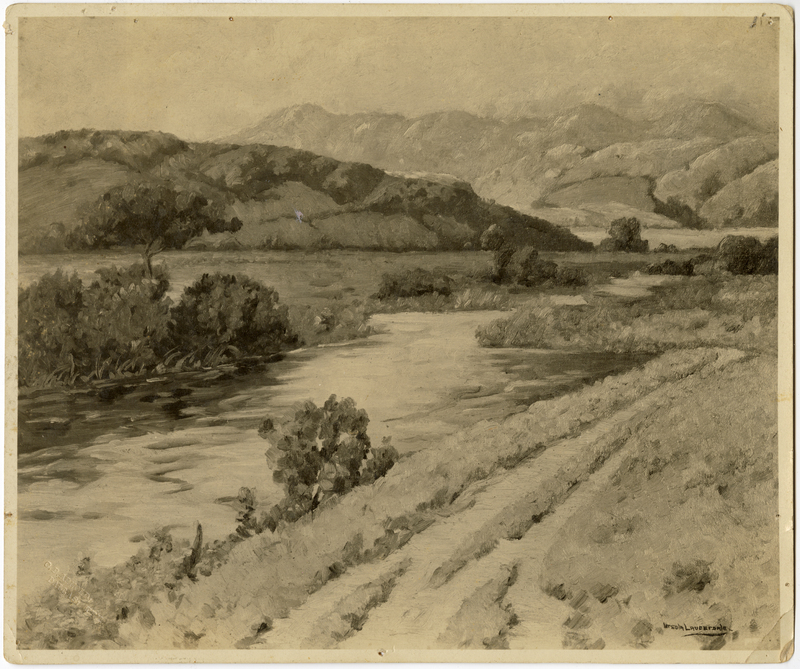 Landscape painting by Ursula Lauderdale. “C.E. Arnold, Dallas, Tex.” written on the back of painting.

Landscape painting by Ursula Lauderdale. “C.E. Arnold, Dallas, Tex.” written on the back of painting. 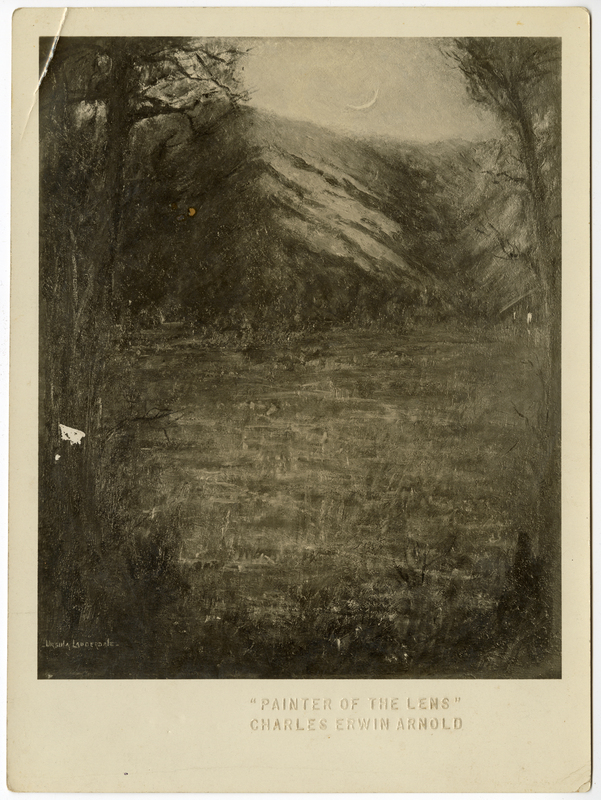 By the title he gives to this piece, Charles Erwin Arnold must have been astonished by the picture Ursula Lauderdale snaps here: of a quiet grotto, guarded by trees and fortified by a mountain, framed by shrubs and dressed with soft, sweet grass.

In person, one might have been struck by the serenity sculpted into this piece, with silver light layered over deep, brooding greens and dark, moody blues that Texas art historian Francine Frisk said onlookers were to have been inspired by in one of her similar paintings, “Pilgrim in the Night”. 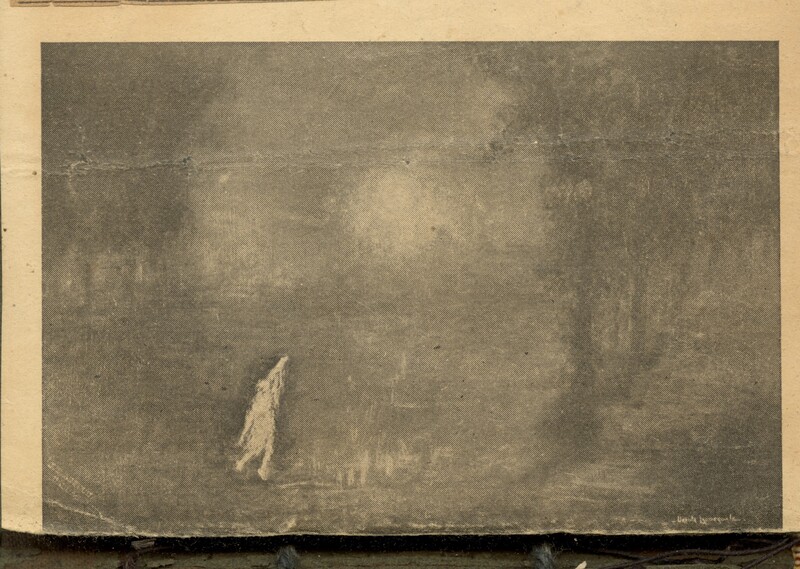 "Pilgrim in the Night" by Ursula Lauderdale

This is a newspaper clipping of Lauderdale's famous painting “Pilgrim in the Night”. In it, one can see a ghostly figure drift distractedly through the clouded landscape Lauderdale has blurred around him. 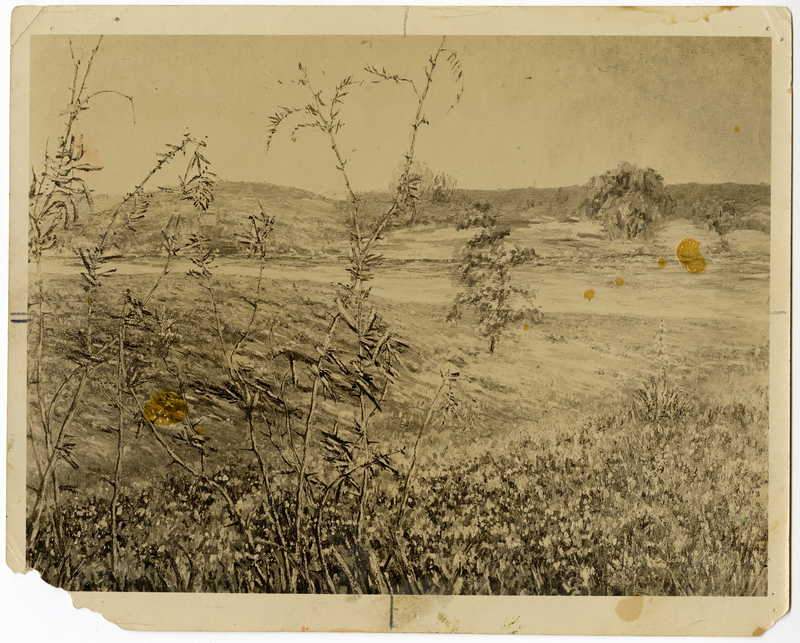 Painting of a field by Urusla Lauderdale

Painting of a field by Ursula Lauderdale. Ursula manages to capture the simplicity of the field despite the vast amount of detail of the work itself. She utilizes various techniques to show the small pieces of grasses and plants while ensuring its not too distracting. The details are primarily located in front of the canvas and decrease as the eye moves back towards the hills. Ursula gives the stage to the plants that would typically be overlooked in one's gaze towards the vast hills.

“Star Light” A painting of what appears to be trees, a field or body of water, and the night sky with stars. As is common with Lauderdale’s   landscape paintings, there is a heavy atmosphere to this piece, with a strong focus on the center that pulls the viewer in to look for little details. 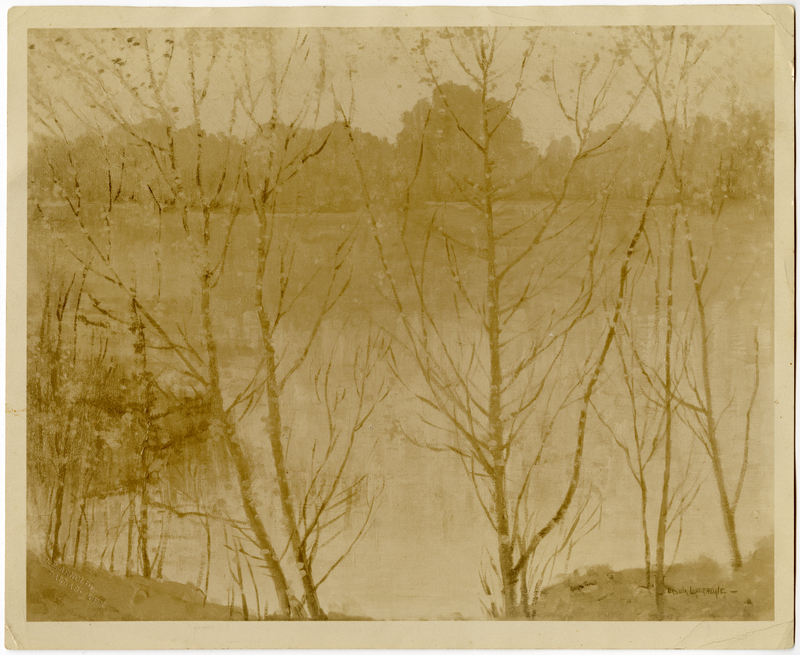